Over 50 miles of the Pacific Crest Trail (PCT) pass through Sierra County in California.  The trail’s 2,663 miles run from Mexico to Canada.  For the past ten years, I have had a fervent interest in the PCT.

During a recent camping trip in the Lakes Basin Area of Sierra County, Chris and I hiked a tiny fraction of the PCT while heading to Deer Lake.  A reroute of the trail in 2017 meant that the old Deer Lake trail is now officially the PCT.

The trail was rocky and steep and included a one thousand foot elevation gain to reach the lake.  Each time we faced south, we were rewarded with a view of the Sierra Buttes, the dominate peak in the Lakes Basin Area.  The Buttes were adorned with a tapestry of snow. 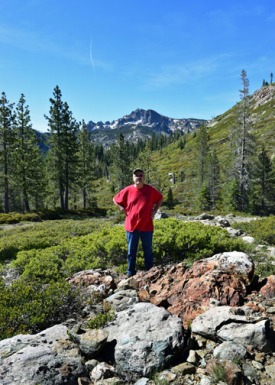 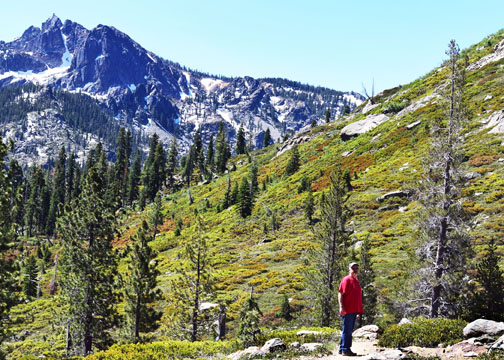 The Sierra Buttes in the distance.

During the 1850’s, goldminers retrieved gold from several tunnels burrowed in the Buttes.  A fire lookout at the top of the mountain was built around 1915.

In the 1990’s when our children were young, we hiked several times as a family to the lookout.

We passed an unusual sight in the branches of a tree: dozens of tent caterpillars housed in a colonial web.

When the caterpillars are fully grown (about eight weeks) they will leave the web to spin their own cocoons.  They will emerge two weeks later as adult California tent moths.

A light wind cooled us from the uphill exertion.  We stopped for a break and pulled off trail near the edge of a cliff.  From there we had a panoramic view of the craggy peaks of the Sierra Buttes.  We overlooked numerous waterfalls trickling down the mountain.  A small body of water was nestled in the canyon below the cliff.

After a short rest, we packed up our snacks and headed down trail.  We hadn’t reached Deer Lake yet, but it was time to return to camp.  Back in 2012, I hiked to Deer Lake with our son.  I was disappointed that Chris wouldn’t get to see it.

As we made our way down the mountain, Chris pulled off trail and called back to me.  “Follow me,” he said, so I did.

In that moment, he reminded me of a young man again, bushwhacking his way through the brush, climbing over boulders like we did in our 20’s. We reached the bank of a grassy pond.  It was Grass Lake that we had looked down on cliffside.

Grass Lake didn’t compare in size or beauty to Deer Lake, but hiking with Chris, immersing ourselves in nature all morning, and exploring the outdoors together was a bigger thrill than reaching our destination.

Later that day we sat on the porch of Packer Lake Lodge near the trailhead.  We reminisced about all the time we spent in the Lakes Basin Area with our children.  A PCT hiker joined us.  As an avid fan, follower and admirer of all things PCT, I was in my glory while the three of us talked trail.  It was the perfect ending to a day filled with beauty and adventure on the PCT.

10 thoughts on “Beauty and Adventure on the PCT”