The first day of summer saw the mercury hit triple digits, a scorching 104 degrees.  Chris came up with a perfect plan to beat the heat: head to Yosemite and hike to Sentinel Dome, then have a picnic at Glacier Point.  At 8,000 feet, that area of Yosemite was bound to be cooler than home.

We wound our way up the road and spotted a black plume of smoke rising above the trees and wafting over the forest.  Traffic came to a stand still, so I turned off the car.  Little black ashes drifted in through the open windows.  Chris—who has extinguished many types of fire— guessed that it was a car fire.  We couldn’t see the blaze but heard popping sounds and thunderous grenade-like booms.  He explained that the sounds could be breaking glass, exploding car tires or bursting compressed cylinders.

Fire trucks edged passed the line of waiting cars, then a Ranger walked by.  He confirmed the car fire and told us that the road would be clear in an hour.  Instead of waiting, we turned around and devised a new plan.

Heading north towards the valley, we stopped at Tunnel View.  Vehicles heading south were detained and not allowed to enter the tunnel due to the fire up ahead.

Continuing on, we traveled to Half Dome Village.  As luck would have it, we procured the last parking spot at the trailhead lot, then made our way on foot through the forest to Happy Isles.

The trail skirted and crossed the tumbling Merced River.  Water surged powerfully, a joyous rage creating its own cooling breeze.  I shivered with glorious goose bumps, shocked that the air was so much cooler there. 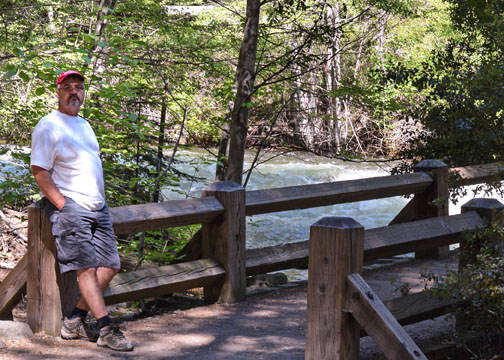 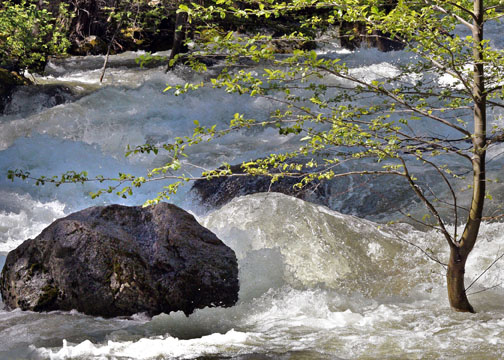 Content with the revised plan to keep cool, we walked the various paths and visited the Nature Center.

At noon we left the refreshing trails at Happy Isles and found a picnic spot nine miles away by the river’s edge.  It was warmer there, but nothing like the heat wave at home.

If the rest of the season is anything like its first day, I foresee us heading to the park quite often to beat summer’s heat.

14 thoughts on “How To Beat Summer’s Heat”