Prologue  Two nights prior to the hike, my trail family: Erin, Adam and Dan arrived in town.  We had dinner together, then gathered around the fire pit out back where the topic of conversation centered on the trail.  They spent the night, and in the morning Chris made his famous banana pancakes.  Again we talked trail and gear until time came for them to head to Yosemite to acclimate.  That night I tossed and turned getting only 90 minutes of sleep—the result of a painful UTI (despite the fact that I was taking antibiotics).

Chris and I left home at 5:15 AM and were to meet the others at 8 AM.  I thought maybe I could sleep in the car on the way up after my restless night, but the excitement of the trip and the trepidation I felt about carrying a heavy pack (the heaviest yet at 37 1/2 pounds) kept me awake—not to mention the many stops at outhouses along the way.

It was nearing 8 AM when Chris parked the car at Tuolumne Meadows Lodge.  I strapped my pack in place and grabbed the hiking poles.  Chris accompanied me on the one mile hike out to the Lyell Fork and Twin Bridges area, our meeting spot.  The pack, which I began thinking of as The Beast, weighed heavy on my hips and my eyes drooped with exhaustion.  A few minutes later we were at the bridges.  I unhooked the pack and sat to rest.

Soon my trail family, who walked from the backpacker’s camp, arrived.  We took a few photos memorializing the commencement of our trip, then I hugged and kissed my husband goodbye.  Heading in opposite directions—Chris towards home, me southbound—he called out one last time, “Bye, Ma!” and waved.  It was hard to leave him.  I felt like crying but didn’t want to lose any more bodily fluids.

The walk through Lyell Canyon was relatively flat, the easiest the trail would offer for the next several weeks.  It was hard to focus on the beautiful scenery though because of The Beast on my back.  I started by taking a break every hour, 9 AM, 10 AM, 11 AM.  Shouting ahead to my trail family that I was going to stop, I walked to a slab of granite near the clear waters of the Lyell Fork.  It was a spot where Chris and I often picnic.  I unlatched The Beast and sat for awhile thinking of him. 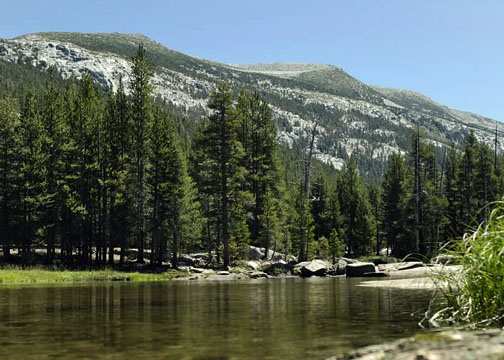 Back on the trail I focused on the ground, one foot in front of the other, and by noon was completely worn out.  I came across my trail family lunching by the river, so I pulled off and did the same.  Unfastening The Beast then taking off my shoes and socks, I washed the dirt off my feet in the river and dried them with a bandana.  I wasn’t hungry but the egg salad sandwich I brought from home was heavy so I ate what I could.

After lunch, The Beast became heavier and I could only walk 20 minutes at a time before taking a break.  I needed a nap, so I threw The Beast and myself on a patch of grass near the water.  I shut my eyes and tried to sleep.  Moments later I felt a presence…something was there.  Yawning, I looked up.  A deer rustled through the trees and crossed the meadow in front of me.  It was a pleasant sight and I wanted to set up camp right in that spot.  Alas, I strapped The Beast back on and continued to walk.

My trail family, who had a more aggressive hiking schedule than I planned for myself, were going to hike according to my itinerary for the first six days. The plan for the night was to hike out of Lyell Canyon, climb the mountain and camp in the forest near the footbridge. However, during our lunch break, we decided against climbing the mountain, but instead setting up camp at its base.

My mind raced as I walked slowly through the canyon.  I was worried.  The Beast was heavy!  What was I going to do?  This was supposed to be the easiest day of all, and here I was seriously thinking of quitting.  Maybe I could spend a few days alone in Lyell Canyon, walk back to Tuolumne Meadows and catch a bus home…I could bury the majority of my food, I’m not hungry anyway…I could leave the heavy books on the trail—someone would find them and take them.  Yes, those thoughts actually crossed my mind; however, I knew how important a good night’s sleep was, so I was willing to wait and see how I felt the next morning before making the decision to quit.

My trail family was nowhere to be seen and the canyon had ended abruptly.  The mountain was in front of me.  Slowly I dragged my body and The Beast up the mountain panting with every step.  Worn out and weary, I looked up and saw Erin and Adam on the trail in front of me without their packs.  I was relieved to see them.  I noticed that they were staring at something off trail.  Perched on a dead log was a hawk devouring a rodent.  After a few moments of watching the predator rip apart its prey, Erin led me to a hidden campsite just off the trail.  The short climb had ended.

The campsite was next to the rushing Lyell Fork with easy access to the water.  It was a tiered site and had many flat boulders to set things on.  Detaching The Beast from my back, I chose the lower tier while my trail family chose the upper tier.  Later, two middle-aged school teachers set up camp between us.

I was exhausted beyond belief and not very hungry, but made dinner anyway to help lighten my pack.  First I collected water, purified it, then had to heat it.  It was the first time using the new stove aside from practicing at home.  I bought the MiniMo Jetboil cooking system because of the push-button ignitor.  Once it was set up, I pushed the button to ignite it and nothing happened.  You’re kidding me, I thought.  Is this a sign to go home?  I pushed it 15 to 20 more times before it lit with a loud whooshing sound.  While dinner cooked, I set up my tent and changed into soft and comfy camp clothes.  Minutes later I choked down a bag of chili mac with beef, cleaned up, said goodnight, climbed into my tent and fell into a deep and restful sleep.

16 thoughts on “Day One on the JMT with The Beast”