I awoke to another cool, clear and quiet morning.  While laying in the tent, I thought back to late yesterday afternoon before the rain began.  Four campers joined our campsite.  Two large, lanky men who totally ignored us and set up smack dab in the middle of camp, only to pick up their belongings (including their fully raised tent) and move to somewhere in the bushes.  Then two girls with jumbo-sized backpacks bigger than themselves who waved hello and set up camp adjacent to us.  Most often what I saw on the trail were people like these hikers, traveling in pairs.

Bundled in every warm garment I had, I left the tent and waved good morning to the girls who were up and about.  With each exhale of air, I could see my breath.  The sky was clear and the water still.  It beautifully reflected the stately pines on the opposite shore.

Although the sunlit grasses around the lake exuded cheer, my senses were dulled by a minor headache.  I’m sure it was due to dehydration since I didn’t want to drink the pond water.

As the campers started to rouse, my thoughts turned to the future.  Today was our last day hiking together.  Once we hit Reds Meadow, Chris would come and bring our resupplies.  My plan was to venture out on my own from there.  My trail family would continue at a faster pace walking more miles than I could do in one day.

Although going solo is what I had planned for the past six months, I began to question if I was really the type of person to do that.  The thought was daunting.   After traveling with a close-knit family and seeing people who hiked with a partner—like the ones who camped in our site—it made me long for my own partner with whom to share the experience.

The girls with the jumbo backpacks waved goodbye as they and the unfriendly men hit the trail towards Reds Meadow.  We Late Starters gathered near the pond’s shore and talked about the bothersome barking we heard the night before.  Thereupon, the coyote howled and barked again!  Perhaps this time he was saying good riddance to us all.

Packed and ready to go, we started off together, excited to get to Reds Meadow for many reasons: to take a shower, to eat a burger, to have a beer—or water, in my case.  I still carried a bottle of purified pond water but was loath to drink it.

The angle of descent increased as we walked through the forest.  Besides the western white pines and lodgepole pines, we began encountering red fir trees.  Blazing Saddle was astonished by the myriad of downed trees and slowed his gait to take it all in.

On the other hand, I had no problem keeping up with speedy Slip Knot and Aqua Man.  On this fifth day of hiking, I was stronger—plus it was downhill.  What weighed heavy on me was not the pack, but the indecision of continuing solo or quitting altogether.

We crossed many dry creek beds that earlier in the year would have been good spots to gather water.  While walking, we played a game: try to come up with a song for every letter of the alphabet, then sing a portion of it.  I imagined that this is what my trail family, who always hiked together, were doing the whole trip.

Slip Knot and Aqua Man pulled off the trail.  Passing them, I reached a junction and stood by for them to catch up.  Together we all awaited Blazing Saddle.

We passed boggy Johnston Meadow and little Johnston Lake as the trail continued to descend.  We walked down a granite slope overlaid by pumice sand where the steep steps, again, were knee-high.  Someone told me they were made that way for horses.

Aqua Man walked off trail very close to the edge of the mountain.  I heard both Blazing Saddle and Slip Knot yell for him to get away from the edge.  One wrong move and…..just thinking about it made my hands sweat. 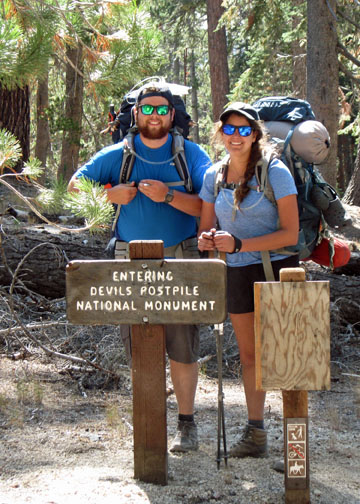 I don’t know how Blazing Saddle disconnected from the group, but he was no longer with us.  At another trail junction where the PCT and JMT met, we stopped and waited.  We spoke with a couple of hikers who walked through but Blazing Saddle never came.  Finally we made the decision to continue towards Devils Postpile.

I mentioned to Slip Knot that I didn’t know if I was going to continue with the thru-hike.  My trail family carried a Garmin InReach that allowed them to text back and forth to loved ones.  I carried a SPOT Gen 3 Personal Tracker that did not have two-way communication.  I was concerned about having no contact with anyone for the remaining 18 days.

To reach Devils Postpile, we took a fork down to the riverbank and crossed and bridge.  For the whole of the trip we encountered only backpackers.  Once we reached the National Monument, there were only day hikers: nicely coiffed women wearing make up, men wearing collared shirts and designer sneakers—a far cry from our disheveled look. 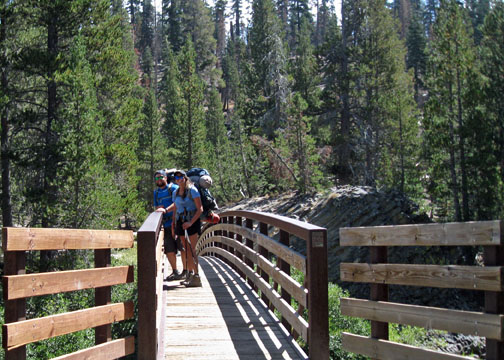 Devils Postpile is one of the world’s tallest and most nearly perfect examples of columnar basalt.

It would have been more amazing to me if I wasn’t parched, hungry, dirty, and if my mind wasn’t inflicted with indecision.  Several tourists stopped and spoke with Slip Knot as we strolled through the park.  They were fascinated with her story of hiking the JMT and had all kinds of questions about it. 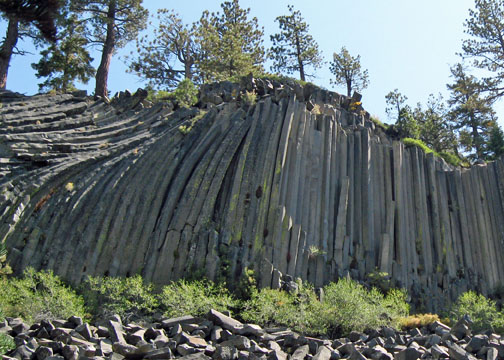 A man with whom I spoke was shocked that we did not walk on any roads to get from Yosemite to Devils Postpile.  How ironic was it that just a few moments after speaking with him, we ended up walking half a mile along a paved road to Reds Meadow Resort.

We climbed the steps to the resort hoping to find Blazing Saddle there.  It was a hub of activity.  Surrounding a dirt courtyard was a general store, the Mule Café, rustic cabins, a bathroom with flushing toilets, a bathhouse and a laundry.  People were picking up their resupply buckets, taking showers, and eating.  Inside the café were the Aussies from a few days ago, Nathan and PK.  Nathan came out to say hello and I stuck my head in to say hi to PK.  The girls with the jumbo backpacks were eating ice cream bars, their hair wet from a recent shower.  They waved goodbye and continued on their JMT journey.  Chatty Cathy, a young man who hiked the JMT three times, made eyes at Slip Knot and couldn’t wait to talk with her.  A photographer we spoke with on top of Donahue Pass was there along with many others.  Moments later Blazing Saddle walked up.  We were complete.

It wasn’t long before we were seated in the café woofing down burgers and drinking beer—water for me (a pitcher).  Hot showers were next: $5 for five minutes plus $2 for a towel and soap.

Satiated, quenched and clean, we walked a quarter mile downhill to the campsite ready to continue roughing it in the woods.  We pitched our simple tents under the stars next to glampers (people camped in a trailer) whose muffler-less generator was an assault on our senses.  That night I tossed and turned, not because of the annoying generator, but because I was unsure of what to do.  My heart wanted to continue on and see more of the amazing sights I had only read about.  I was excited to see Chris and hoped that he would help me decide.