When the wind died down and Michael’s rhythmic snores tapered off, our campsite fell into silence. Moonlight cast a silvery glow to our private perch above the lake. It was a cold night making it hard to stay asleep. Cinched tightly around my face, the hoody on my mummy bag helped to keep in the warmth.

Morning arrived too quickly. The weather had changed overnight. Grey clouds filled the sky and the wind came back with a vengeance. By 7:30AM we were back on the trail climbing switchbacks on the east ridge of Purple Lake.

Still enthralled with the rocks we saw, we stopped and gazed at the massive mountains before us. 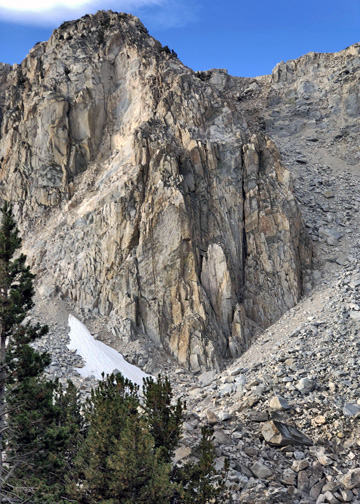 We had learned that the talus below the mountains was not just a pile of rubble.

It was a rock glacier with ice in its core and was moving downslope. In fact, most of the talus fields we saw that day were rock glaciers. It was fascinating.

The walk became easier as we headed on a downward approach of Lake Virginia.

Clouds raced across the sky.  The trail led us through a nearly dormant meadow skirting the lake. 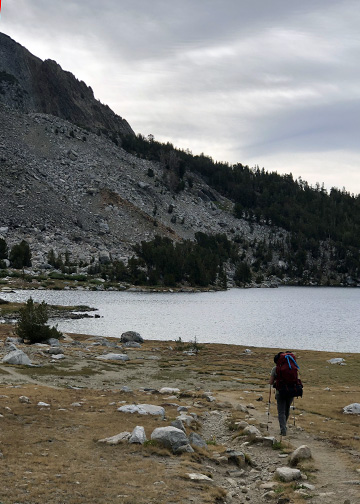 In the meadow was a water crossing. Rock blocks, intentionally placed, made it effortless.

A football field away was a second crossing. But whoever constructed the second path did not consider people with short legs. The distance between some of the blocks was greater than I could leap. It was an ungraceful crossing but with Michael’s help, I didn’t get wet.

The trail is like a rollercoaster, a continual track of ups and downs. We left Lake Virginia and began a slow, gradual climb on gritty sand.

Reaching a saddle, we saw Fish Creek twisting through the grassy meadow below us.

Picking up a little speed on the downhill—but not much because walking on a dry slope of switchbacks can be scary—we finally reached Fish Creek under a canopy of quaking aspens.

Upon reaching the creek, we unburdened ourselves of our backpacks and watched the trees’ trembling leaves. Michael filled our water bottles, but our break was short-lived. The blood-sucking mosquitoes became too much to bear so we moved quickly through the lush forest and followed the creek.

Like the thrill-ride that the trail is, we began another steep ascent then descended on the side of a mountain to a sturdy steel bridge above the water. 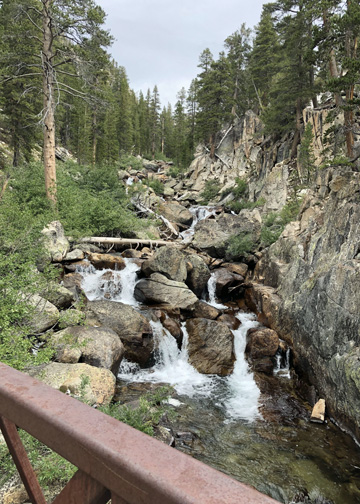 Once over the bridge we walked about a mile to a tributary of Silver Pass. Within yards of each other were two water crossings. Zigzagging across the stream and back, we kept our eyes peeled for the trail junction that began the ascent of Silver Pass.